Interview of Bernard from Laperleencampingcar

The 10 favorite motorhome areas for travelers

Motorhome is the ultimate must-have for sports fans!

Top activities to do during your RV trip 🎣🎾

5 games to develop your children’s taste for adventure

The radical change of life of Benoît Giffard

Top Events in April in Europe

If you are looking for the best European festivals and top events in April you could visit during your motorhome trip, look no further! CaraMaps has selected the best ones for you.

In 2017, Stratford-upon-Avon will celebrate Shakespeare’s 453rd Birthday and commemorate Shakespeare’s life and playwright. During the weekend, people wearing period costumes gather in the streets. There is first the traditional birthday parade, and then visitors and locals will enjoy theatrical performances, lectures, dance, music, circus, shows for children and many other activities.

King’s Day is a public holiday in the Netherlands, celebrated all over the country. In Amsterdam, Dutch, expats and tourists join the biggest festival of the year. In the streets, canals and parks, people are wearing orange, there is live music, DJ’s, plenty of family activities, good food, and of course the huge street market where people are selling whatever you could imagine. 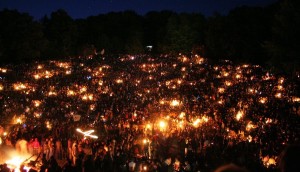 A legendary story tells that witches and warlocks gather for April’s last day each year, at the highest point of Harz Mountain, the Brocken.

Germans hold a large celebration on 30th of April for Wotches Night. People meet all dressed as witches, and they dance around huge fires. This is probably the most original was to say goodbye to April and welcome May. Local versions of Witches Nights exist in many countries, such as Sweden, Crezch Republic or Finland. 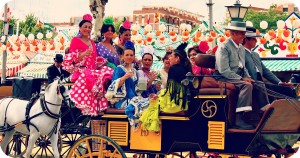 April Fair in Seville is the biggest and the most colorful festival in Andalusia, known worldwide for its very special atmosphere. The « Feria de Abril » begins two weeks after the Semana Santa (Holly week), and lasts for one week.The festival is a gathering of women wearing flamenco dresses and men in typical outfit of farmworkers, parade of carriages and riders, and of course food music and dance.

Now you just have to choose your favorite within this list of top events in April in Europe, and have fun! Don’t forget to share with us your opinion if you went to one of them.

You can also read our articles “Best Theme Parks in Europe: Motorhome Holiday Idea” and “Europe’s Most Charming Towns” on our Blog.

Top Events in May in Europe

Back to the Motorhome Show in Paris 🚌

Top Events in July in Europe for your...