Your 10 favorite motorhome areas of January 2021

The seven wonders of the world by motorhome 🕌

Top 5 most beautiful RV road trips around the world

The most used tools to travel by motorhome

Interview of Bernard from Laperleencampingcar

Discover the Christmas markets in Italy ✨

Are we living in a motorhome crisis or boom? 🚀

How to keep busy during a long journey?

Trip to the motorhome: how to build its route?

Minimum age of driving, use of mobile phone, wearing seat belts … what are the road regulations in the European Union ? What rules are in force in these different countries ?

Within the European Union, it is important to note that each country has its own highway code. As a driver, you must respect the traffic laws of the country in which you are traveling with your motorhome.

In general, the majority of European countries use the same types of sign which symbolize : danger, priority, obligation, prohibition, information, direction and indication, … There are also other additional and specific signs. Generally, signs have approximately the same appearance : size, color, design,… from one country to another.

Concerning road regulations in the European Union, for most countries the minimum driving age is generally 18 years except in the case of Ireland and the United Kingdom where it is 17 years.

As you probably already know, in most countries of the European Union, you have to drive from the right side. However, driving is on the left in Cyprus, Malta, Ireland and the United Kingdom.

Another point of road regulations in the European Union is the seat belt, which is absolutely mandatory in both the front and rear of the vehicle.

The use of the hand-held mobile phone at the wheel of your vehicle is completely prohibited in all states of the European Union. Note that some countries accept the use of hands-free kits.

The maximum  level of alcohol in the blood authorized varies according to the country’s legislation (between 0.2 and 0.5g /l) and according to the driver’s experience, the size of the vehicle… However, some countries do not tolerate any presence of alcohol in the blood when you are driving your vehicle such as : Hungary, Romania, Czech Republic, Bulgaria and Slovakia. Another important point is that all European Union countries formally prohibit drugs and the use of medicines that degrade the condition of the driver.

Concerning the road regulations in the European Union, the toll roads are also a big point. There are a lot of different laws and systems from one country to another.

Equipment in the vehicle

In general, road regulations in the European Union concerning mandatory equipment or accessories on board are mainly the same for all EU countries. Normally, you must have a safety net, a warning triangle, a first aid kit and a fire extinguisher in your vehicle.

Most countries of the European Union use the system of points for the driving licence. 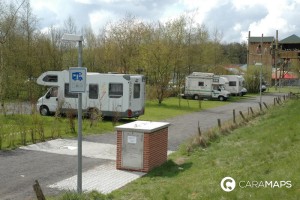 Hope to have helped you on road regulations in the European Union. And especially to make your next trip in motorhome easier and nice ! Do not hesitate to look for more information before your living.

On the same theme, you can also check out our other blog posts : « Services area in Europe : a small selection », « The 5 best destinations in motorhome ».

Enjoy your trip with CaraMaps !

Plan a motorhome trip with your pet 🐶

Christmas shortbread: a recipe to make in a...

Motorhome Basics for Beginners in UK

Selling your motorhome: Tips and Tricks 💸

Clean your motorhome before summer 🚐🌞💪🏼

Crisps to light your barbecue!

In France the Max driving speed for motor home is slightly below the normal limit.